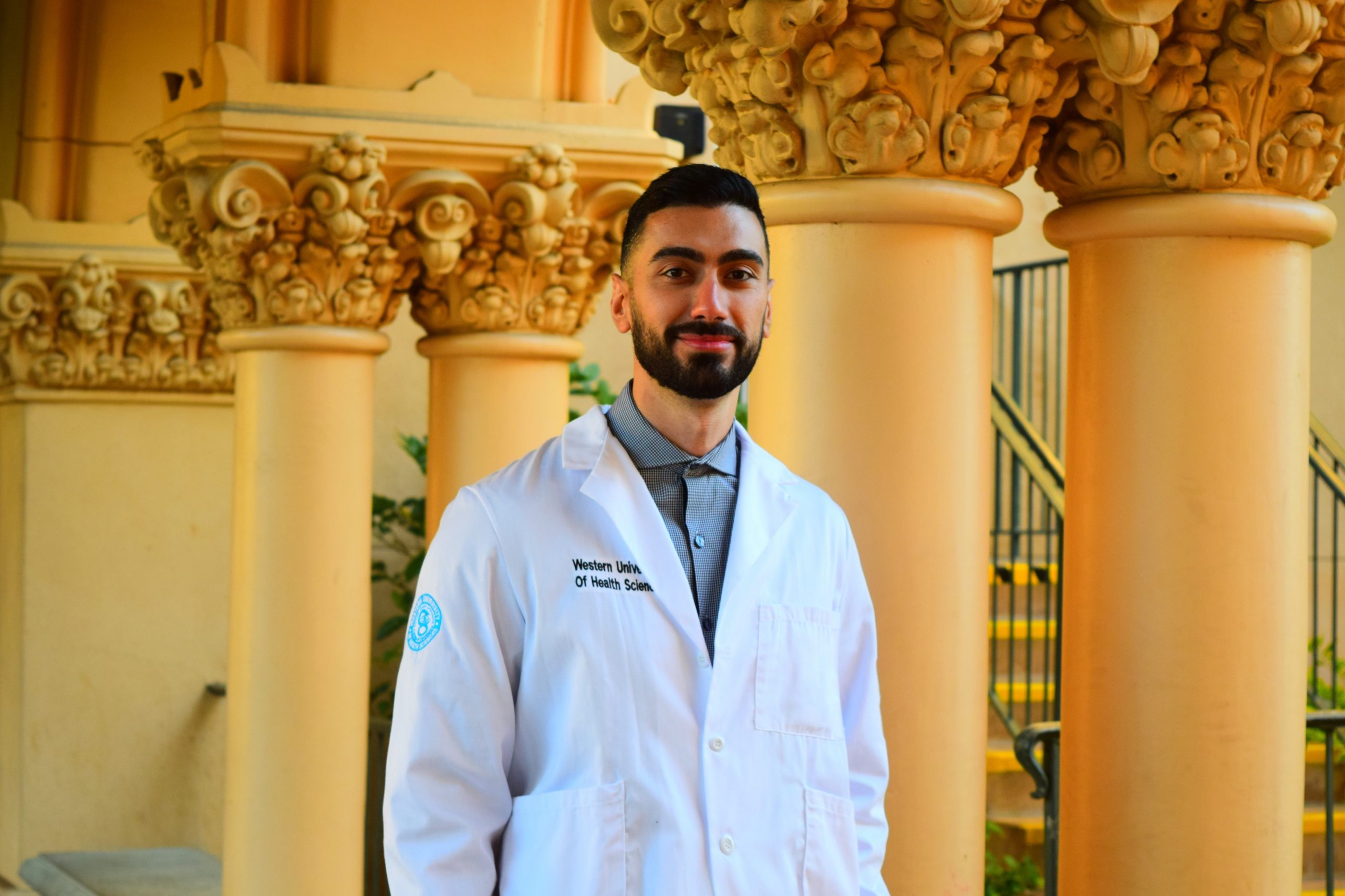 No matter how much you prepare for the start of your four years in optometry school, there will no doubt be some things you end up learning as you go. To help you avoid learning “the hard way,” as they say, we found four students nearing the end of first year who were willing to share what they eventually realized about situating themselves for success. Here’s what these members of the class of 2021 had to say.

Amanda Nealand, a first-year student at Midwestern University Arizona College of Optometry, says “In the beginning we were all nervous because we weren’t sure what to expect. I would spend a lot of time 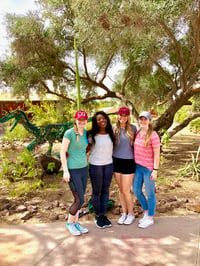 studying, often sacrificing sleep to do that. We would joke that we couldn’t even enjoy a nap anymore because we would feel guilty. As the year went on I learned what was expected of me and how to be more efficient in my studying. My advice is to take the nap, so to speak. If your body is telling you that you’re tired, listen to it. You won’t be able to learn at your highest level when you’re tired.”

Arra Apikian, a first-year student at Western University of Health Sciences College of Optometry, had a similar experience. “Sleep is a major factor in graduate school,” he says. “The first few weeks I stayed up late and studied while getting a maximum of five hours of sleep per night. Because my schedule was really packed, the lack of sleep was having a negative effect. When I changed my sleeping habits, I became more energized and focused with my studies, which helped me to perform even better on my exams.” In addition to getting enough sleep, Arra finds staying healthy overall is a good policy. “Taking care of yourself is important while you’re in professional school,” he says. “If you’re eating the right foods and staying fit, it helps your body maintain its strength to fight stress from school as well as illnesses. I try to fit working out into my schedule as much as I can. It helps to eliminate stress and tension.”

Good Notes are a Necessity

Reflecting on her first year, which is coming to a close at Western University of Health Sciences College of Optometry, Evalin Zhao’s thoughts turn to note-taking in class, not only in optometry school but also in undergrad. She says, “I wish I would have realized what a large portion of the science courses from 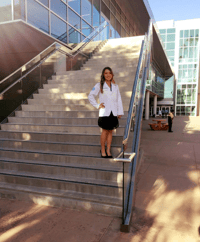 undergrad is very much relevant to optometry school and the profession and understood how to take better organized and more concise notes. In undergrad, I wrote the majority of my notes in notebooks, which isn’t very efficient for optometry school. First of all, our lecture material is posted in either PowerPoint or .pdf files. Furthermore, it was very helpful to replace notebooks with a device and programs that I can draw on and type into. (I use a SurfacePro and OneNote.)” Evalin points out, too, that every course in professional school is related to one another. “Therefore,” she says, “you need an effective way to cross-reference materials, such as comparing information from current and previous lectures. This strategy is also useful in clinic. For example, when I saw an internal hordeolum (a bacterial infection of the glands inside the eyelids) during clerkship, I immediately called up what I had just learned in an anterior segment lecture to help me make a list of differential diagnoses and treatment options.”

Thoughtful notes are crucial for long-term learning as well, Evalin explains. “I also wish I had learned sooner how to retain information for long-term learning,” she says. “In undergrad, I cared more about memorization and making good grades, but my brain dumped out the information as quickly as I learned it.” Participating in a study group is a great idea in optometry school, Evalin continues. As she says, “I was never a study-group type of student in undergraduate school, but what I realized over the course of this academic year is I did better on exams if I had previously discussed the information with classmates. Whether it’s teaching the information to another student or asking for help, it reinforces the knowledge.”

Arra totally agrees about the importance of good notes, also emphasizing organizing and saving them. “All of the classes in optometry school build on each other, so having the notes saved helps you in understanding and reviewing material,” he says. “Also, you will see all the things you’ve learned on the board exams. Keeping your notes organized will help you study more efficiently and be successful when taking such a big test.”

Your Mom May Not Like This Theory, But Grades Aren’t Everything

And learning is different than grades, Arra adds. “Grades aren’t everything,” he realized. “When starting school, everyone was stressed about getting As. Getting As on exams is great, but it’s much more important to learn from your mistakes, pass your classes, and understand the material for the long run.” Adds Amanda, “Optometry school is a humbling experience. We all do well, but there will always be someone who is better at something. Take the opportunity to learn from them.”

Studying hard is of course the way to go, Amanda says, but she also offers this advice: “I can’t stress how important it is to put yourself out there and make friends right away. Groups form quickly and your friends will be your life lines throughout school.” That’s right, Arra says, “You also have to realize that you’re in a class with your future colleagues, so taking time to make connections is important.” And he cites another way to connect: attend optometry conferences and meetings. “At professional meetings, you make connections with doctors and fellow students from different schools,” he says. “You’re able to learn from the experiences of people who have been in your shoes and also have become successful in their professions and practices.”

Health Professions Students Can, and Should, Have a Social Life

And, yes, optometry students can have a social life! “You just have to learn a new way to balance things,” 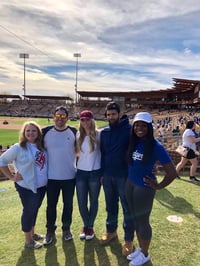 Amanda says. “In the beginning of school, none of us expected to have a social life. The first two weeks felt overwhelming, but then we all realized that to get through this we’d need to have a little fun. I usually plan on taking a night off from studying during the week and a night off on the weekend. We plan our weekends based on what our schedule looks like for the next week. Some weeks are harder than others. Things we like to do include volunteering at vision clinics, hiking in the Grand Canyon, watching Arizona Diamondbacks spring-training baseball, and going to the zoo. It’s hot here, so we also swim a lot.”

Balance, Time Management and Creating Your Own Routine are Essential

Speaking of balance, Judy Hamouie, a first-year student at Western University of Health Sciences College of Optometry, admits that even though she had heard it was important, it didn’t really sink in until she was in school and feeling somewhat burned out. As she currently sees it, “Optometry school is our job for four years. While we have to make some sacrifices when it comes to family, friends, social life and hobbies, we don’t have to drop them.” As time progressed during first year, Judy learned to minimize her time engaging with those aspects of her life and spread them across her calendar along with her responsibilities.

All of the students who spoke with Eye on Optometry for this post say they came to understand that a healthy balance between school and other parts of life goes hand in hand with time management. “I also learned time management and presence along with balance,” Judy shares. “If I wanted to keep certain 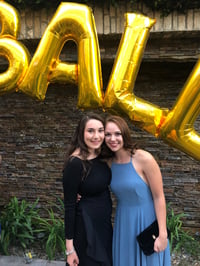 things in my life, I needed to maximize my time all the time and be really present for each task. Whether it’s schoolwork or leisure, I don’t want to waste a single moment.” There’s also a lot to be said in favor of developing a routine that works for you, Judy says. “I realize how incredibly important it is to have a good routine/rhythm for your daily life. It helps with the rigor of it all. The truth is that no matter how much you love what you’re learning, you won’t always be 100% pumped and motivated to study and work. I’ve developed my own rhythm in school, and now it’s become so routine that I don’t have to struggle with procrastinating. I ease right into the work even if other options around me are trying to grab my attention.”

Quitting What You Enjoy is Usually a Mistake

“For example, Judy continues, “I really enjoy the whole process of cooking, and before optometry school I was able to cook every night when I came home from work. When I started optometry school I thought I needed to change that so I stopped cooking altogether. Not only was I eating badly, I was also losing something I find a lot of joy in doing. It made me feel like I wasn’t really living life and I felt more apathetic in school. Now, I acknowledge that I can’t cook something new every night, but I can cook once a week and make enough to pack away for lunch and dinner for the rest of the week. Another example is making time for friends who live across town. I often download lectures to my iPad and listen to them while I’m driving to see them.”

It’s Best To Do Positive with a Capital P

From her first-year experience, Judy offers an additional insight. “I learned that the most important gift you can give yourself in optometry school is positivity. There are certainly stressful moments. Maybe you’ve been cooped up in a room somewhere studying all weekend. You still have a million things to do and it all feels overwhelming. This is when you need a good attitude to remind yourself: If you got into school, you’ll make it through school. All growth is uncomfortable, and the process is just as rewarding as the reaching the goal.”

Amanda also found her way to that perspective. She expresses how “At times, your family and friends will believe in you even when you might not believe in yourself. Trust them because they are right. You CAN do it! Optometry school will be hard, but you can do it.”

Picture One (Amanda Nealand): Having a social life is important while you’re in optometry school. Amanda, third from left, a first-year student at Midwestern University Arizona College of Optometry, and her classmates spend time together and stay active outside of school by volunteering at vision clinics, hiking at the Grand Canyon, swimming (it’s hot in Arizona), and, as shown here, going to the zoo.

Picture Two (Evalin Zhao): Evalin, a first-year student at Western University of Health Sciences College of Optometry, says being part of a study group helped her to be a better student.

Picture Three (Arra Apikian): One secret to success in optometry school for Arra, a first-year student at Western University of Health Sciences College of Optometry, is eating healthy and staying fit.

Picture Five (Judy Hamouie): Judy, on the left, is a first-year student at Western University of Health Sciences College of Optometry, with a friend, a second-year student, during a night on the town, the Student Government Association’s Annual EyeBall.

The Means To Write A Scholarship Essay Introduction W

Pay Someone to Write My Essay

Pay Someone to Write My Essay

Get all latest content delivered to your email a few times a month.